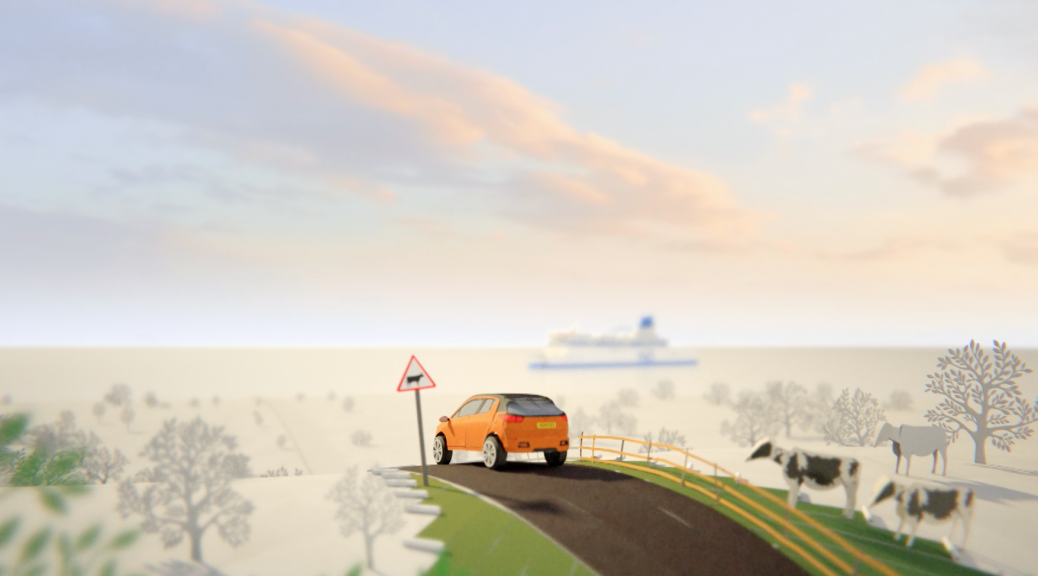 My last project before Christmas was at Seed Animation, somewhere I’d begun the year working on the surreal and hilarious Halwani Chicken commercial. This time around I was doing similar work on a P&O commercial, the style of which was to match a genuine stop-motion animation. As the client wished to see colour progressively spread through the world of our travelling couple, the choice to do this advert in 3d was made.

My input was as a layout guy and TD type. Layout is essentially placing things on screen in such a way that the eye feels comfortable when looking at the shots and is led to the correct area of interest. The TD (Technical Direction) input was mainly the unrolling paper effects seen throughout the animation.

Each strip of rolling paper was actually one long grid, flat by default, with a controller null at one end. A spiral curve was parented to that null and the grid deformed by that curve. As the null moved the spiral along the grid, an expression offset the position of the grid so it stayed put and the end unrolled. The grid was then extruded to give it thickness in its unrolled position, the new polygons kept in a separate cluster so they remained white, giving the impression of cut paper. As the operator stack remained live, the whole thing could be rolled back up, placed to suit the layout, then unrolled and deformed by a lattice to hug the surface it’s sat on. Having been animated, the whole thing was then converted to 2s so it mimicked the stop-motion 12fps standard.

Other inputs from me included the wobbly sellophane-like wake at the bottom of the ferry and the stones building up the castle in the background.
As with the Halwani commercial earlier in 2016, the whole project was rendered using Redshift 3D out of Softimage. Render times from Redshift still blow me away. It’s such a boon for small studios.