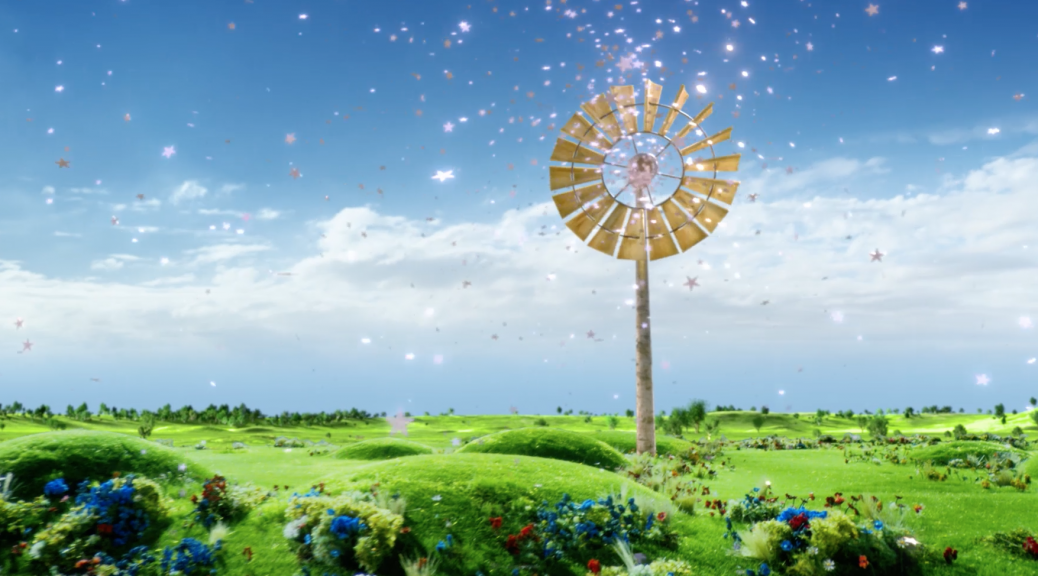 From the summer of 2014 through till the summer of 2015 I was involved in a project the scale of which I’d not played a part in before. A new series of Teletubbies was announced as being in the works, and Lola Post, where I was freelancing as a 3D type, had won the contract for all the VFX. All 60 episodes of it.

This amounted to hundreds of shots, a volume which is ordinarily associated with film projects. Initially I was involved in the pre-production, working alongside Pinewood-based prop-makers Propshop and the production company, Darrall MacQueen, in laying out designs for the set and other VFX assets. The actors were to be shot on a blue screen with the set being a 1:20 scale. It was our digital set layout which was 3D printed and then dressed by the prop shop staff. This allowed us to use the same 3D data when lining shots up in postproduction.

During the shoot I was working out of a hair and make-up room next to stage three at Twickenham Studios, alongside the DIT. This allowed me to continue developing assets for the 3D team back in London, while still being available on set for questions about set extensions, digital assets and so on.

Once the team on set were up to speed and questions of a 3D nature were thin on the ground I returned back to Lola Post in Fitzrovia. There we had set up a dedicated office and team specifically for the Teletubbies. My main responsibility there was to be lead 3D TD. However I was not the only one. Tiddlytubbies had become such a large part of the show that they had their own section, led by Jonny Grew and Josh George, with much of the animation by Steve White.

In the meantime, I had become what the supervisor, Garret Honn had described as ‘chief landscape gardener’. Every external shot has a set extension. The real scale model is only 4 metres across, representing an 80 metre circle in Teletubbyland. I had come up with a set extension system which was refined as the project went on, but allowed a few of us to continually churn through the many moving or high angle shots that required distant hills, grass, clumps of flowers and trees to be seen beyond the edge of the model set. For many shots which were lower or nowhere near the edge of the set, we got away with putting a large panoramic image in the background and sliding it around from shot to shot.

For the sake of generating distant hills with realistic lighting and so on, we’d gone down the route of using Terragen, a software I’ve used many times for external landscapes. However, with its relatively slow render times, it was only truly used for the opening and closing credits where the light swings round, creating raking shadows. The rest of the time, the background is a large cyclorama, rather akin to a zoetrope, constructed out of Terragen renders. This approach kept render times down, something that was very important with such a volume of material to get through.

Naturally enough, Teletubbyland needs more than just grass and hills, so there are trees, flowers, many tufts of grass and so on. The trees are based on illustrations created by an independent illustrator, brought to life through a combination of softwares; Speedtree, Mudbox and ultimately Softimage. Additionally, we created flowers based on the scale models from Propshop, alongside the stunt ball for Laa Laa, custard bubbles, snowballs and other non-spherical assets, such as the windmill. Naturally there was toast. Custard and toast. No wonder this bunch are funny colours.

Once the project had truly gotten underway I spent roughly half my time answering questions, watching dailies, attending meetings and keeping an eye on the render farm. In that regard it was the most technical role I’ve undertaken. The rest of the time was spent tracking shots, managing who did what and occasionally doing shots myself. Props to the rest of the 3D team for their untiring efforts, especially Olly Nash and Ismini Sigala who were both in it for the long haul. Between us and Tammy Smith we’ve tracked more than enough shots for a lifetime, animated many flowers and a lot of spherical objects.

Naturally, there’s more to life than the 3D side of VFX. The 2D side was phenomenal in scale. So many blue screen shots, so little time. It all needed keying, roto work, cleanup and the final compositing too. To list everyone here would be crazy and considering only a handful of people will read down to this paragraph, i’m not going to list them all! Just be aware that for every shot on Teletubbies that you watch with your kids, about 5 people will have touched it and most of those will be compositors and roto artists. Thanks to all involved. Your efforts did not go unnoticed!

Teletubbies is currently on air in the UK and is bound to be shown elsewhere soon. Response seems to be positive so far. Due to very strict licensing agreements I can’t currently post videos from the show here, so it’s over to the BBC with you!

A few months back I worked on a trailer for the South Bank Show, featuring Melvyn Bragg walking through the Leake St tunnel under Waterloo station. Bragg was shot on a greenscreen, with the environment being recreated in Softimage by myself and fellow freelancer Rasik Gorecha.

The obvious question there is why? Why can’t Mr. Bragg just go into the tunnel and we shoot it there, huh? Well, there are a few obvious answers to that. The tunnel, itself a road with access to a car wash half way down, is dank, contains certain undesirable types Mr. Bragg would probably best steer clear of, and is continually in flux thanks to it being one of the few areas in London where it is legal to graffiti. It’s also not the most comfortable of places to sit around in for long hours on a shoot. The other reason is that lots of the graffiti was to be replaced with animated posters and artwork featuring well known faces from the arts. That process is a lot easier if created digitally and lit using indirect lighting solutions.

My input on this was twofold. Firstly I set up the lighting in Arnold. After an hour or so of experimenting, the solution found was to place shadow casting point lights in the ceiling under about half of the strip light fittings, plus a spot light at either end of the tunnel. Additional fill lights were used to brighten up the nearest walls. The lights in the walls toward the back of the tunnel are merely textured models and not actual lights.

One of the things with a Global Illumination solution like Arnold is that it can lead to fizzing. One solution to lighting this tunnel would be area lights. This was ditched as a plan extraordinarily fast as it led to lots of noise, plus the modelled lights themselves act as bounce cards essentially negating the need for area lights at all.

Rasik had the majority of the modelling done by the time I joined in the project but was yet to embark on cables. Whilst he set up initial texturing, I became cable monkey. I modelled cables and brackets, trays for them to run along, pipes and all sorts. It took a few days of continually modelling cables before I’d finished them. Simple stuff but it really added to the believability.

The top of the two images above is the model with finished textures and below that is the finished lighting.

The final trailer is not as it appeared on Sky for 2 reasons. They added their own logo at the end, naturally enough, and they own full copyright of the sound bizarrely, so mine’s a silent movie. Add your own ragtime soundtrack as appropriate.