Whenever there’s a break in work and I’m aching to do my own thing I work on a few ideas. One of these that’s taken a step in the direction of starting is to take a piece of footage I shot last year and alter loads of it. It’s a 9 second or so sweep across the Ashdown Forest, not too far from here. What I’m going for is a near-future post-war landscape with much destruction. One of the things to suffer will be a tractor, shown below. I’m a bit off finishing the model let alone the texturing, but it’s nice to let you lovely people see what I am actually doing when not working!

[Edit] Modelling Done now! Will dink it a little then texture: 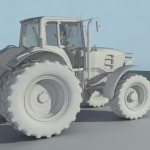 This is a breakdown of a short sequence made for an ITV drama called The Fattest Man in Britain. The taxi has a rig following it that holds the camera in a fixed position above the taxi, looking down on it. Unfortunately this kind of rig needs stabilising and in this case 2 cables were run to the front of the taxi. A slight issue there is that the 2 cables were now visible in 4 separate shots.

I tracked each shot in Syntheyes bringing the 3D data into Softimage. Simple 3D geometry was put in place with camera projected textures, individually airbrushed so that the wire was removed in each. When rendered and comped with mattes, the cables were no longer an issue.